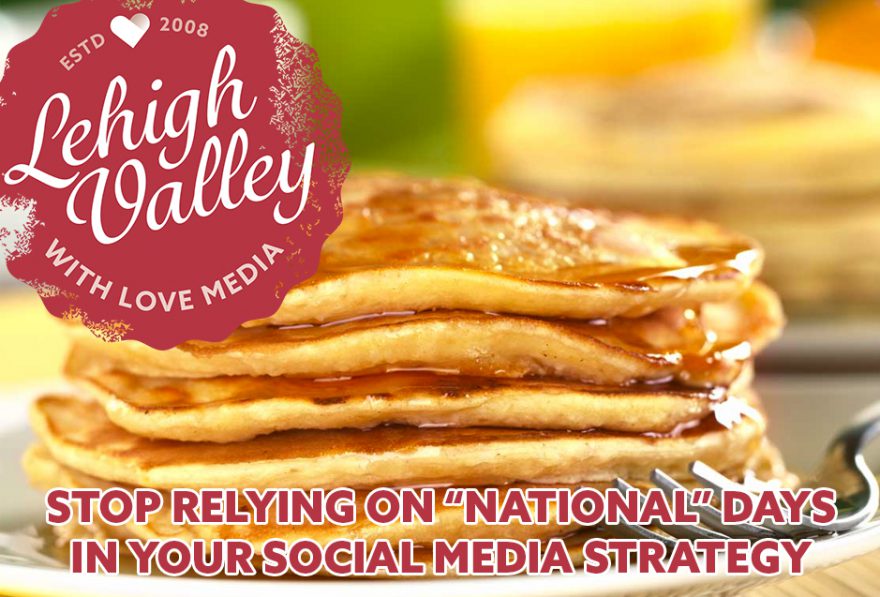 Some social media managers, marketers, and strategists think it’s great when “National Ice Cream Day” comes along. Some are more than happy when it’s “National Coffee Day.” Some are full of absolute glee because it’s “National Pancake Day” and they should stop it, unless your company happens to be IHOP.

Why? Because it’s absolute laziness at its finest and in its purest form.

Much like the social media “managers” who think it’s a great idea to plan out all of their posts for the week on Monday, relying on whatever “National” day it may be only serves to pigeonhole you with everyone else who is doing it.

And who else is doing it? Oh, that’d be everyone. Are they getting a few retweets and likes? Sure. But, are they getting any actual engagement and involvement? Probably not.

They are most likely just getting more people to go to IHOP, which is GREAT for IHOP, but not so much for whatever company you’re trying to get information out for.

Why? Because, since your company is doing the same thing as every other company, namely putting out a lazy #NATLpancakeday tweet, it’s going to just end up in the tumbling tide of forgettable posts from the day.

Being successful with social media relies on coming up with ideas that aren’t necessarily in line with what everyone is doing on a certain day just because some online calendar told you to do it.

Just because it’s National Ice Cream Day doesn’t mean that it’s time to whip out your handy list of haphazardly thrown together best spots in your area to get ice cream.

It is, however, a great day to put together a list on the best places to get an alternative to ice cream.

It’s a great day to talk about the best places to burn off those extra ice cream calories.

It’s a fantastic day to do anything other than think inside the box.

Just say no to being lazy on social media. Your engagement will show you why.