Facebook wants to keep you using Facebook as much as possible. One way for them to keep their users spending time logged into their app is to make it as fun and customizable as possible.

These new features have already begun rolling out to a select number of users and should see more widespread availability in coming weeks.

If your profile hasn’t allowed you to make any of these changes just yet, here’s what you can expect. 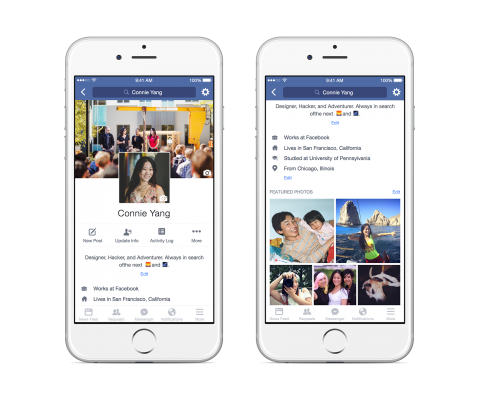 The looping profile video is similar to what Snapchat allows its users to do with theirs. It’ll allow you to take a video of yourself that will loop without sound, unless it is clicked on. A still photo will appear in other places, such as the thumbnail that appears next to your newsfeed posts.

Featured photos will allow you to pin up to five photos to the top of your profile, making those photos the first thing people see when they Facebook stalk you.

Temporary profile pics will stay up for a user-selected predetermined amount of time and are great for when you feel like putting a color filter on your picture for a cause, but then wanting to change it later on. Just set it for the weekend. It’ll go back to your regular one just in time for the new cause that sweeps Facebook.

Your short bio will be a place that, much like Twitter and other social media accounts, allows you to let people know a bit more about you. All of this information, of course, needs to be public for non-friends to view it.

Get ready for a little bit more Facebook fun in coming week.s