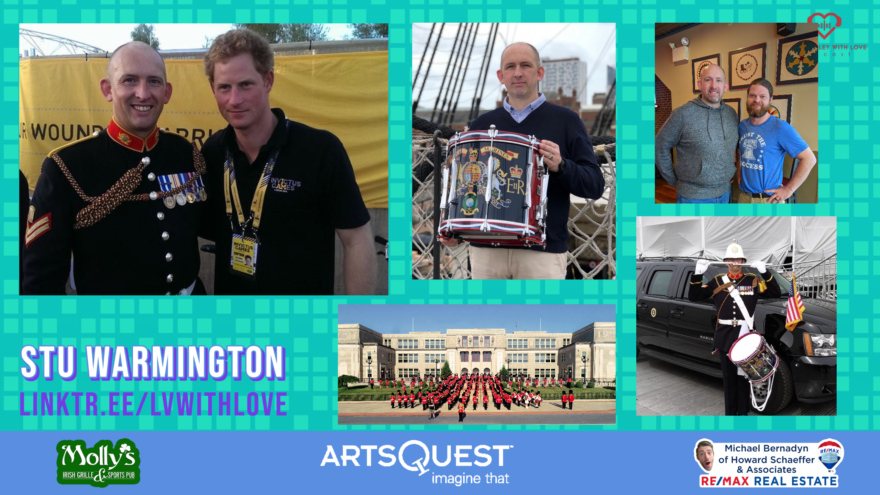 In this episode, we talk to Stu Warmington, Marching Division Manger at the British Drum Company. Stu and I met over twitter when we asked if anyone had been to one of our favorite local bar/restaurants Machs Gute.

In a career spanning over 22 years, including 18 months training at the Royal Marines School of Music, Portsmouth.

Stu Warmington served in all six Royal Marines Bands and performed for the Royal Family and various Heads of State while traveling all over the globe including Jamaica, South Africa, USA, Russia, Oman, Qatar and Australia to name but a few. Stu was also deployed to Kosovo in 2000 and Iraq in 2003.

Among Stu’s most memorable engagements are performing at the Queen Mother’s Funeral, numerous Military Tattoos around the world and planning and participating in the successful Guinness World Record attempt for the longest, continuous group drum roll at the Tower of London in 2014 (64 hours 27 mins 59 seconds).

Stu’s most cherished memory was the performance for the opening ceremony for the 2015 Rugby World Cup which was streamed around the world to over 1 billion viewers. His compositions have been showcased at the Royal Albert Hall and Horse Guards Parade in London and the Royal Edinburgh Military Tattoo on more than one occasion.

Stu has worked passionately with many national youth bands over the years and was appointed as President of the Traditional Youth Marching Band Association, a position he held for over 7 years. In 2016, Stu became a member of the United States National Association of Rudimental Drummers (NARD). Overseas, he is the Percussion Advisor for the Liberty High School Grenadier Marching Band in Bethlehem, USA.

Watch our video version of this episode below or at this link: https://youtu.be/6-rWFZR0f9g