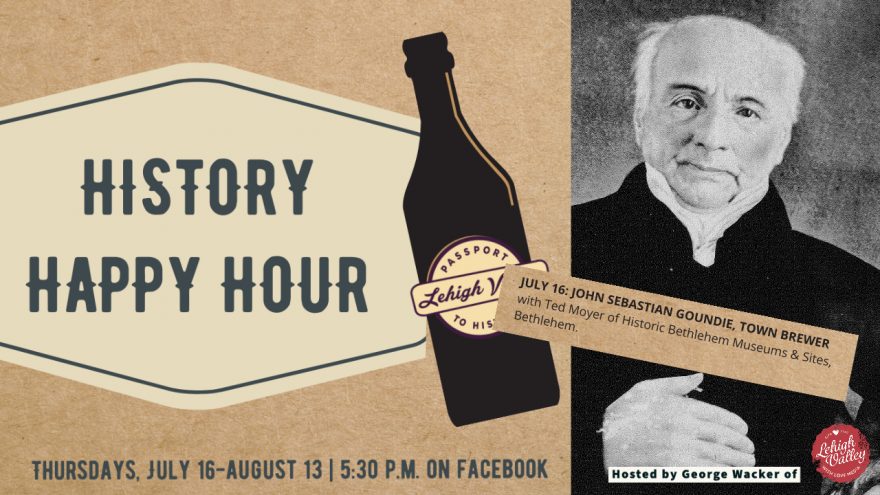 The five-part series, hosted by Lehigh Valley with Love Media’s George Wacker, will air live on Thursdays at 5:30 p.m. on the Lehigh Valley Passport to History Facebook page.

The drinks will be shared on social media a few days prior, and attendees are invited to drink along during the show. Each featured drink comes from a local Lehigh Valley brewery, winery, or distillery.

“We are thrilled to partner with several local breweries and distilleries and Lehigh Valley with Love to provide history lovers with a fun, new way to explore local history,” said Megan van Ravenswaay, Director of Development at the Northampton County Historical and Genealogical Society.
“Due to these unprecedented times when folks are seeking free, socially-distanced entertainment, our 36 partners wanted to create a series of activities to enjoy safely at home. We hope everyone will enjoy the unknown historical facts, hilarious stories about our forefathers (and mothers), and marvel at bizarre occurrences with area historians. This certainly isn’t your high school history class!”

July 23: Hugh Moore –The Slightly Wacky Inventor of the Dixie Cup with Martha Capwell Fox of the National Canal Museum, Easton. Drink Sponsor: To be announced.

August 20: Christian’s Spring, An Exploration of the Brewery and Other Trades in this Lost Moravian Settlement with the Moravian Historical Society. Drink Sponsor: To be announced.

Follow “Lehigh Valley Passport to History” on Facebook. Check back a few days prior to the event to learn more about the drink sponsor and their featured beverage.
To learn more, please visit lvhistory.org.