Instagram will begin rolling out an update that will add some very Snapchat-like features in coming weeks.

Of course, Instagram isn’t saying publicly that they are copying one of Snapchat’s best features, but they are. And, hey, there’s nothing inherently wrong with that. Social media platforms have always borrowed ideas from each other in an effort to stay relevant.

What exactly has Instagram copied? Well, you’ll now be able to post video and photo stories that only stay visible for 24 hours in addition to your “permanent” Instagrams. 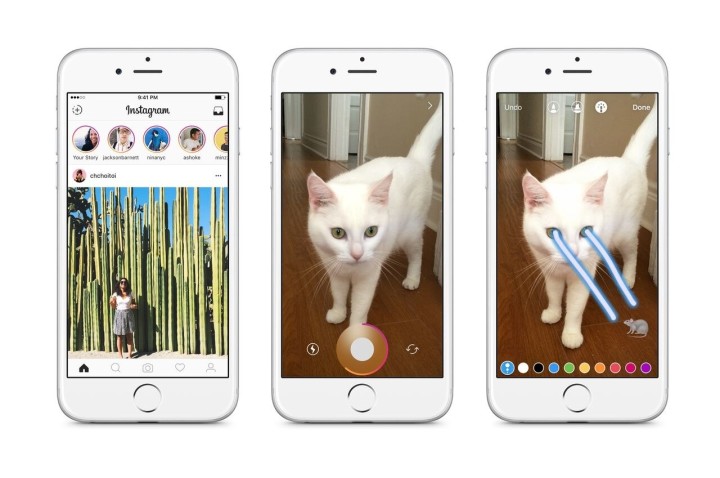 You can view others’ stories by clicking on the new story circles located at the top of your Instagram feed. These stories are selected from the accounts that you interact with the most.

When you tap on a Story, it loads, begins playing, and advances from moment to moment automatically. So if someone has posted a series of updates throughout the day, an Instagram Story will take you through those moments in the same order they were uploaded. When you finish one person’s Story, the app automatically advances to the next person or brand, and so on. – Buzzfeed

Creating your own stories will also be a brand new experience. After you launch the stories camera, it will go full screen and allow you to add emoji’s, text, and other fun stuff.

This update is great for those who haven’t adopted Snapchat yet, or those that want to integrate some of the more personal Snapchat features into their already well-followed Instagram account, even if Instagram won’t outrightly admit they kinda stole the idea.

“I think that the Stories format is seeing broad adoption and I think will be adopted by a lot of folks. In the same way that Facebook has a feed, and was first to introduce a feed, and now lots and lots of apps have feeds. Twitter was the first to use hashtags; now hashtags are everywhere. If you saw another service launch with hashtags, you wouldn’t think anything of it and you certainly wouldn’t expect them to call it something other than hashtags. I think Stories will be viewed the same way. It’s a new format, it’s a powerful format, it’s one that I think will be adopted across the industry,” said the company’s head of product, Kevin Weil – Buzzfeed

Get on there and let us know what you think!

instagramsnapchatsocial media
Inaugural Lehigh Valley with Love Comedy Fest Presented by Never Again Radio to Bring in the Laughs
How Your Small Business Can Benefit from Pokemon Go!