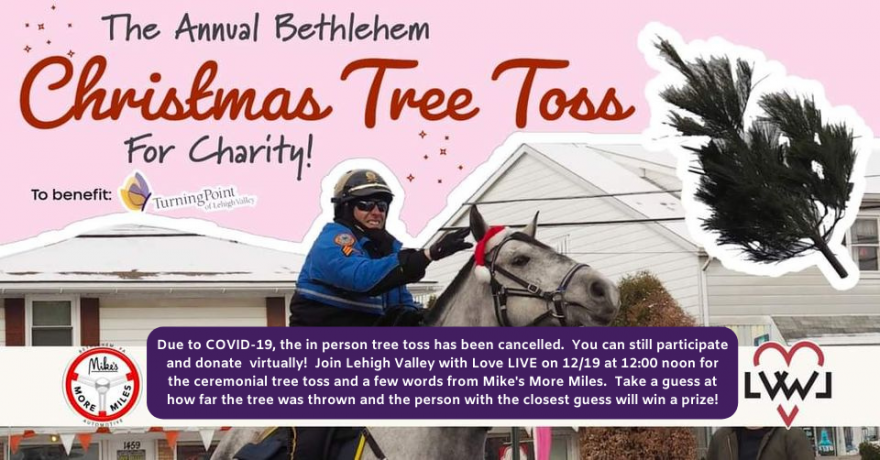 This year’s event will be held virtually!

Please donate at this link.

Tune into the live stream on Facebook at 1 p.m. on 12/19! We will be giving away a prize to the person who guesses how far we can throw the tree!

The original event was first held in 2002 when then Meineke Car Care owner Peter Kearns challenged Mike DeCrosta, currently of More Miles Automotive, to a contest. The resulting yearly tradition became something of a bizarre, but wildly popular, way to celebrate the holiday season. Peter Kearns passed away in 2016.

“Pete is the one who came up with this wonderful idea and made sure that it was always in the spirit of raising money for charity,” DeCrosta said. “We want to continue to honor him by holding the event in his name.”

More Miles Automotive, in conjunction with Lehigh Valley with Love Media, will host the ‘Peter Kearns Memorial Christmas Tree Toss’ with proceeds going to Turning Point of the Lehigh Valley. The public is encouraged to attend and throw Christmas trees for distance in an effort to be this year’s champion! There will also be small giveaways and refreshments.

Local dignitaries will also be invited to attend and participate in the event. Last year, more than 50 attendees threw Christmas trees a variety of distances last year, including children, who have their own mini tree to throw.

Donations of $5 per throw are encouraged. However, donations of all amounts are accepted and can be made in person at the event or by mailing a donation payable to Turning Point of the Lehigh Valley ℅ More Miles Automotive 1458 Stefko Blvd., Bethlehem, PA.