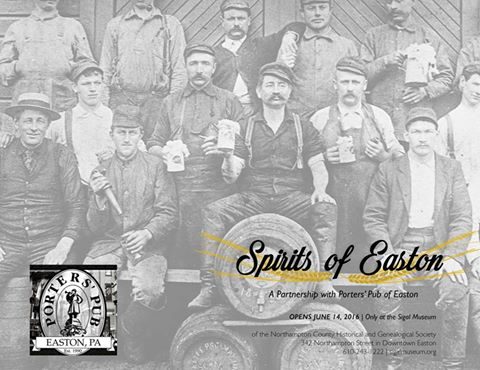 June 9, 2016, Easton, Pennsylvania – The recent rise in popularity of craft and home-brewed beers has been a boon for local breweries and craft beer friendly bars. But, did you know the history of brewing beer in the Easton area goes much further back in time than that latest double IPA?

The Sigal Museum of Northampton County, Pennsylvania, in conjunction with Porters’ Pub, will unveil the exhibit “Spirits of Easton” on June 15 at the museum on 342 Northampton Street. The exhibit will showcase the city’s long and storied history with beer.

“We will have bottles, grain ledgers, photographs, and other items on display,” said Brittany Merriam, Senior Curator at The Sigal Museum. “There are some very interesting artifacts to draw in any beer or history buff.”

Porters’ Pub, located at 700 Northampton Street, which has more than 150 beers available from around the world, is proud to sponsor the event.

“The love of craft beer goes beyond just finding the ones we most enjoy drinking,” said Larry Porter, who owns Porters’ Pub along with his two brothers, Jeff and Ken. “Exploring the history of brewing, especially locally, gives you even more of an appreciation for the craft.”

The first known brewery in Easton was erected in 1821 by Frederick Seitz. The Seitz Brewing Company once surpassed 70,000 barrels before closing and reopening as the Osterstock Brewing Company in 1935. The brewery closed in 1938.

Another historic brewer was Xavier Veile, who worked for Seitz before opening up his own brewery along Northampton Street. Veile’s family ran the brewery, that once produced 12,000 barrels, for decades before it closed in 1941.

Visitors to “Spirits of Easton” will also learn about Willibald Kuebler, who came to America in 1848 and started brewing at Church and Bank Streets. Kuebler’s brewing grew to 50,000 barrels before his death.

The exhibit is planned to run through the spring of 2017, according to Merriam.

For more information on the exhibit, contact Brittany Merriam, 610-253-1222 or brittany@northamptonctymuseum.org.

About the Sigal Museum of Northampton County, Pennsylvania

The Sigal Museum is Northampton County’s leading organization of local history, and home to significant collections of pre-European settlement artifacts, decorative arts and textiles, farming implements, colonial furniture, and more. The museum opened in summer of 2010, offering its visitors interactive exhibits, self-guided and docent-led tours, special children’s programs, lecture series, special events, and more. It is one of four museums operated by the Northampton County Historical and Genealogical Society (NCHGS) in Easton, the county seat. In addition to its exhibits, the Sigal Museum is home to the Jane S. Moyer Library, providing vast and often rare sources for students, scholars, and genealogical researchers.

Porters’ Pub was founded in 1990 by the three Porter brothers, Jeff, Larry, and Ken. The Pub’s original building dates back to 1833 and currently features original stone and brick walls, a mahogany bar and exactly zero flatscreen TVs. Located only 2 minutes drive from Center Square and a 5 minute walk from The Easton State Theatre, it is open 7 days per week from 11 a.m. to 2 a.m. In addition to hearty pub fare, Porters’ menu boasts 20 vegetarian and gluten free choices, many locally sourced, along with 150 craft beers and its famous Mug Club.