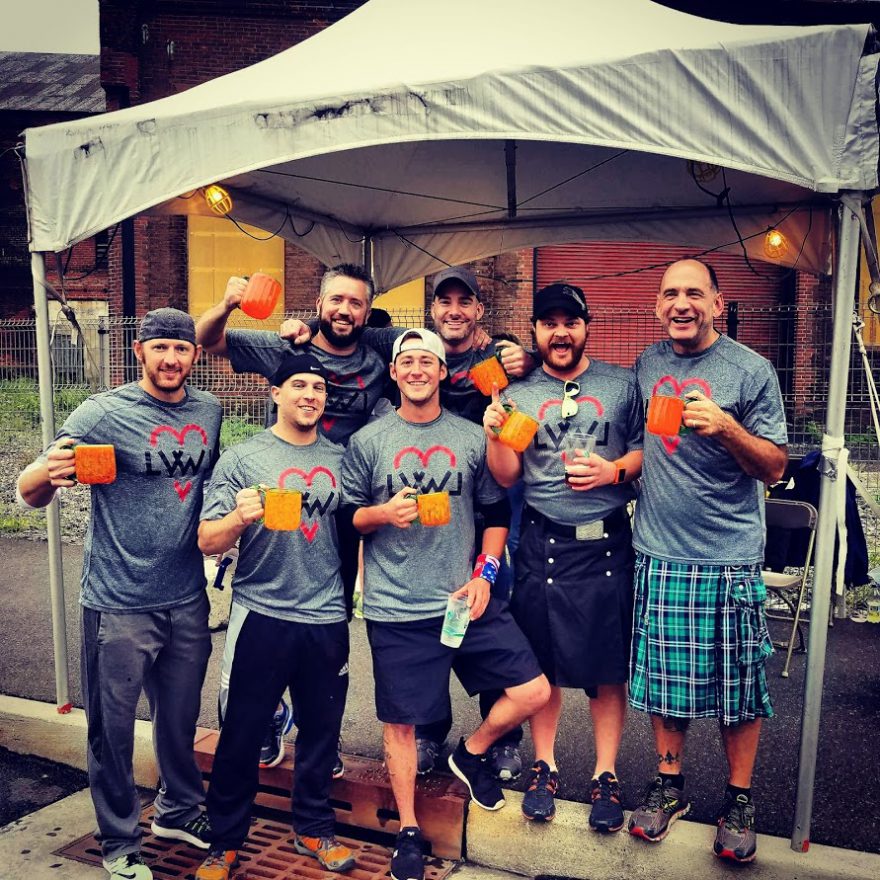 On a rainy overcast afternoon ArtsQuest’s Oktoberfest kicked into full gear, lederhosens and all. As the Yuengling began to flow so did the real competition start, a competition that would separate the winners from the losers, the Raven One to One Media Oktoberfest Celebrity Skill Challenge (ROTOMOCSC for short)!

The seven team pool had representatives from Service Electric, iHeartMedia, Morning Call, Raven One to One, Two Rivers Roller Derby, and yours truly Lehigh Valley with Love. 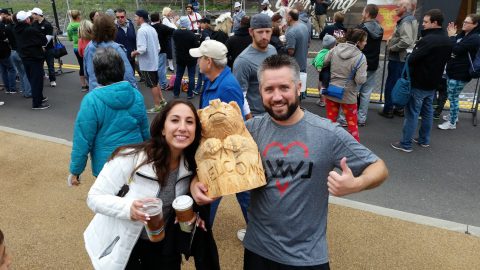 Donning their matching uniform tees, LVWL was led on the field of battle by none other than George Wacker. He was then followed by his league of (un)fortunate gentlemen Ryan Duggan, Pat Duggan, Chris McGinnis, Kris Miszler, Rich Williamson, and Ethan Blose.

As the gauntlet was thrown down these men would have to battle through aching muscles, stifling focus, and crazed heckling all without losing their Yuengling. These men knew the history of their past efforts falling short twice and becoming the perennial 2nd place team. But alas, today would not be no normal day… 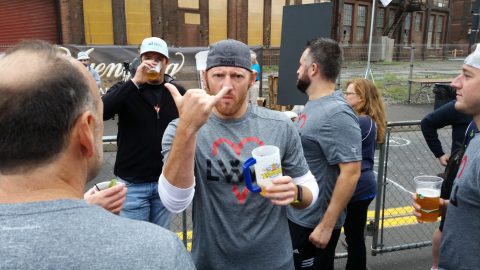 As the competition kicked off, the four-man stein race relay team kicked composed of Ryan Dugan, Pat Dugan, Chris McGinnis, and Rich Williamson made there way to the battle ground. As I was standing at the far end I could see their passion as they gripped the steins.

And as the time came, it was a fanfare of heckling, running, and beer spillage, absolute chaos.  The spillage was reminiscent of a romantic tragedy. A tear almost came to my eye. After the race was finished and a subjective amount of points were taken off these gentlemen took their first victory of the day.

As it became time for the brat toss the amount of jokes of catching brats in buns happened more often than the brats were caught. But the squad of P. Dugan, Wacker, Miszler turned a first round let down into a second round come back and LWVL took their second victory of the day. 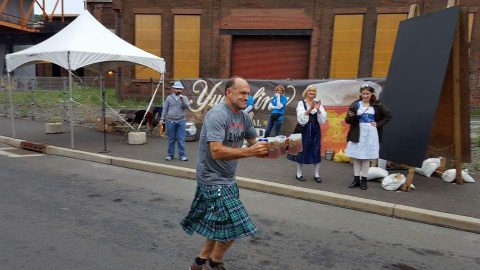 Glorious! These men have made it half to the promise land with their mind on the hand blown glass trophies from the Banana Factory as the made the turn for home in the “Masskrugstemmen” or as we Valley folk know it as the Pitcher Hold. Holding two filled pitchers straight out for as long as you can may have been the most interesting thing I’ve seen some doing absolutely nothing. The fierceness on the competitors faces was nothing but mesmerizing. As Miszler and Blose gave their all, the weight of the steins were just a little too much but LWVL took third and was still in first overall.

And as the fourth and final event of the barrel roll came around close calls and a tiny controversy took the crowd by storm, but alas our heroes were indeed victorious and they hoisted their trophies. LVWL was able to edge out Service Electric by one point from a point deduction technicality.

Overall Oktoberfest was a blast! The second half of this free admission event is taken place this Saturday and Sunday. From craft beer to actual craft Oktoberfest is a good time for all ages. Come experience this German tradition without even getting in an airplane. I’ll be around this Saturday so I hope to see you there too!